The Party returned to the sealed Temple of Lamalla beneath the Tower of Knowledge in Turos Orn. Drakon (Patron Palatine Fighter level ???) charged the party this week with a goal to "clear" level 1 of the dungeon so he could have the Tower mages extend the magic ward across level 1 and thus "claim" that portion of the dungeon.

As a reminder this is my homebrew dungeon. PCs are aware that it has many levels because last week they fell down a hole into a very deep level indeed onto the blue dragon lair of Sheila the Beautiful. Before the session kicked off a few of the players mentioned on the mics they wanted to look into how they might attack or heist Sheila's spot. I'm also sure there was much private PC scheming about such things between sessions. Yet they came on tonight ready for a more modest goal of "clear level 1".

The 1e AD&D Player's Handbook advice on PC play encourages players to stick to their session goal (1e PHB page 107-109). In this section Gygax gives some of the following advice:

-"do not be sidetracked"

-"likewise, there are times when objectives must be abandoned"

Eventually the players voted on doing the 3rd thing lol

But I'm getting ahead of myself.

The party entered the sealed temple with the warded door closing with a creak behind them. They went back through a nearby room with a whales/fish themed bas relief and came to a room filled with rubble as if the back corner had collapsed. Sticking out of the rubble was a Blue Metal Robot hand thing.

Daria cast Detect Magic and claimed it was indeed magic.

Ambrose (PC Cleric level 1) decided to investigate. He took hold of the hand to see if he might pull a golem from the rubble or something but there was a flash of lightning as we was shocked and sent flying across the room, seemingly dead.

Acton (PC Cleric level ???) and Daria (PC BladeDancer level ???) hurried to apply healing and Ambrose did indeed barely survive, but his arms were all seared and destroyed by the harsh shock. He'd never use them again. His Mortal Wound, as per ACKS rules, deemed he'd need 4 weeks of rest to adventure again. He was done for tonight.

The party carried Ambrose body about 50' back to the dungeon entrance and left him lying there next to the blue robot hand. They didn't want to open the door out of the dungeon because the Tower mages claimed they'd only open the wards twice per week. Once to enter and once to exit. The party refused to end their delve after 20 minutes so, sorry Ambrose you can sit here and wait for us to get back.

On the way past the bas relief the party had a weird strike of luck and Daria's Detect Magic was still going. They had been through this room the previous week but didn't detect magic in it. The bas relief of the whales and fish were showing as magical.

Brian (PC Wonderworker Level 1) guessed this meant the whale(s) must talk of course and strangely enough that's what was in my notes. The whale spoke Ancient Zaharan and it said "ask me a question". Brian asked "where is the treasure horde" and the whale described the location of a secret door near a canal and the party was pretty sure, based on last week's delve to level 2, they knew where it was.

They kept looking around level 1 of the dungeon, however, and discovered a small pool with magic music playing from it. Specifically it was playing the song "Aqua Lung" by Grammy award winning heavy metal artist Jethro Tull. Swolus (hench fighter to Acton) noticed a small tunnel in the pool that went directly down.

While I took a break to grab a drink apparently the PCs debated/argued/decided this "clear level 1" mission wasn't cutting it; they wanted the treasure horde the bas relief whale told them about! Off they went.

On their way they came upon some fishmen at the altar the party destroyed last week. The fishmen appeared bummed the altar was gone. The party had surprise on the fishy fellows and dispatched them without too much trouble. However when dead the fishmen turned into humans. The party was confused but didn't linger to investigate long.

Down on level 2 they fought some translucent skin igauna kind of creatures. The party surprised them too and only Olivier (PC Paladin level ???) took a hit. Crossing a bridge over the nearby canal they came to a barracks room they killed a bunch of iganuamen in last week. The whale's directions seemed to lead here and the party spent a few turns searching for secret doors. Kortes (PC Explorer level ???) found one. Beyond it was indeed a chest.

Acton picked up the chest and went straight back to the dungeon entrance. With no encounters on the way it was a pretty short night for the delve proper. There was about 2,500 GP worth of treasure and thus XP in the chest so it was a decent take for a session. Not extraordinary but nothing to scoff at.

Were they wrong to get sidetracked, ignoring Gygaxian "Successful Adventures" best method by not sticking to the "clear level 1" goal? Next week actually answers the question!

I had some time left to hang out on the mic after the delve. Most of the players had logged off but Amrbose and some other players were curious about the Blue Metal Robot Hand. They started asking the Tower mages all about it. Somehow Doc Brownstone, the dwarven machinist patron player based on of Dubzaron was there. He had even hopped on the mic to hang out after session I think. When the Tower mages (NPC) started advising the PCs chop of Ambrose's hand and shove the robot fist on it, Brownstone was aghast. Calling them crazy idiots, nerds, and the like.

Conor (PC Barbarian level 1), however, had a bearded axe. Right there. In his hand... I mean, can you blame him?

Some wires were wiggling around on the robot fist and the tower mages, including Seth Rogen the Burned Out (NPC Mage level ???), were like "go go go! do it!"

Conor chopped off Ambrose's arm in the basement of the Tower of Knowledge. Science!

Ambrose rolled the dice in the chat and ... the fist worked! The metal fist hooked onto his stump.

Ambrose the Cleric now has a Power Fist. It gives him extra strength, it gives him the ability to shock people now and then, but it may also haywire and shut down. Real D&D is quite unpredictable.

Ambrose stated simply "a power fist is worth dying for". Amen, friend.

Alexa this is so sad play "Robot Rock" by Daft Punk. 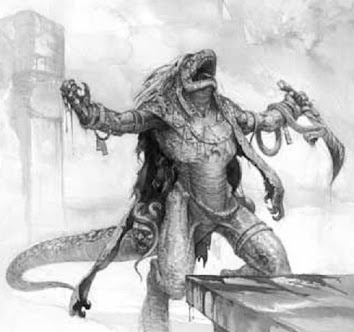