This was a transitional session of sorts. We brought in a new player Acton (PC L1 Cleric of Turas) and the player of Rapunzel (Deceased Level 4 Priestess PC) was sitting out this week in shock and mourning from losing the Priestess last session. The player for Daria (PC Bladedancer level idk) was also sitting out from the disaster which was his Calling in that same session. He wanted me to assure all of you that he missed some #DND in mourning over his Caller failure but, in true BROSR fashion, did not miss any workouts.

He also reports his strength has increased 50% in most lifts. Amazing! One can only imagine his even more impressive strength gains and increased t levels if he played male DND PCs instead of broads.

The session ended up only having 4 players which is quite low for the #Dubzaron campaign. Real DND campaigns can handle this sort of thing, and alot of player turnover. Sometimes, like above, long term (legacy) players need a break. Or life comes at them fast and their elfgame is less important than irl.

It's really no problem. As a DM you don't need to stress about it, just show up at the scheduled time each week and let them adventure how they like. It is on those players to analyze their current party capabilities and find a quest or mission for the session. Brosr dms don't "create hooks" or "craft stories" or guide a "spotlight".

Your group might see a situation where their front line fighter and cleric players are out for a week or two and only mages and thieves remain. It is on those PLAYERS to analyze their party skill set and perhaps, rather than delve a nearby dungeon full of undead and orcs, focus on a goal where stealth and magic would win the day. As a brosr DM then your job is to be flexible, to allow them room to breathe, and allow them room to create emergent story with you based on their character and his previous downtime activities.

My party, despite being down many major players, however was able to head on back to the Nethercity without missing a beat. Because MadEye (PC Venturer level idk) has quite a few henchmen. His legs might be useless but he can hire men to schlep him around the caves beneath the city! They can also open the big stone crypt doors in the Nethercity and hold the front line for the less martial oriented PCs brought to the session.

The party delved the Nethercity and went straight for the section of the dungeon called the Great Temple of the Awakening. I've gotten a sense the party wanted to clear this section of the dungeon completely, almost like trying to 100% a video game or something. I'm not sure what their explicit goal was this night, probably a mummy crypt since those have been very profitable. But it was a random encounter with some weird jackalmen undead with a fire in their chest that was the story of the delve.

I don't remember all the details of the fight because it was a month ago but the 4 jackal things clawed down the front line of 4 henchmen fighter types and  Xanthos's (PC Cleric level idk) war dogs. In the meantime the fire in their chests flew around where they wished and burned up MadEye's loremaster mage he brought down to the Nethercity for study. (Back in the locker, nerd!) MadEye's thief henchmen was also all ripped up.

Nicholas the Wonderworker (PC Wonderworker L1) cast Summon Beserkers and I was back to making Mad Max Fury Road jokes about "witness me" and all that. These summoned beserkers have been through the ringer in this campaign and they keep coming back. So between the beskerkers being behind the enemy and Xanthos up front they were able to finish them off.

MadEye was calling tonight and ordered the party to double time it down the hall in the direction of, I assume, their session goal that night because he wanted to take advantage of the "free" front line fighter beserkers before the summon spell wore off. They ran ahead of the party into the darkness screaming for blood; shiny and chrome.

The party heard fighting up ahead and, when they arrived, some of the beserkers were fighting with and killed by an animated statue. It looked like a dark skinned human with a scarab for a head. Creepy! MadEye was intrigued by the depiction and checked with the Tower of Knowledge about it later (see Afterword).

Anyway the thing was magnetic and some of the beserkers swords were sticking to it. At some point Acton tossed a beserker his warhammer and the two exchanged a bloodthirsty grin.

Eventually the golem was dispatched and the Party looted all the wall graves in the temple hall they had fought twice to travel down. They grabbed up the golem as well, dragging it out of the dungeon.

Some players needed to log off so it was a very short session and we ended there.

Recently the authorities of the city of Dubzaron finally noticed the grand treasure the adventuring Party had been bringing out of the Nethercity. They were informed that there is a 50% tax on all treasure found on empire land. That includes the Nethercity which is below the Capital of the Borderlands.

MadEye took the body of the golem to the Tower of Knowledge and they offered cash for it for magic item creation materia. They agreed they let the Venturer in on what their studies told them about what it was supposed to depict.

On the way out of the Tower, Taxman Tomicus (NPC taxman PITA) caught MadEye and informed him that funds gained in such a way were to be taxed as well. The downtime chat channels lit up.

MadEye hired a tax lawyer to try and prove that golems are except from the taxes for Reasons. He sued Tomicus for stalking him to the Tower at all. I received requests for lawyers and PCs/Patrons studying the ability to "make an adventuring party legitimate" in the hopes it would lower their tax burden.

Players hate taxes but sadly this party is by and large extremely Lawful. They've enjoyed the fruits of being Lawful (what little those are, if you ask some of them on a bad day) but taxes? Nah, dnd players aren't about that. But Lawful PCs aren't about smuggling. So I had to field all the craziness above.

The result with MadEye is that the golem wasn't taxed because the Temple of Turas deemed Tomicus was in fact stalking so the evidence to tax MadEye was illegit.

All the craziness isn't over. It's been a month and we're still hashing it all out. But I mention all this to show how a truly emergent world comes into being with this sort of BROSR play.

The campaign itself has become so strong that I took a month long hiatus from DMing after this session and a substitute DM was able to run the campaign for me.

1:1 time and Patrons pay dividends to a campaign world and I recommend you all give it a try. Check out my other session reports and entries for some advice on how to do it for yourself.

Happy Easter and God bless you.

Alexa this is so sad play "Taxman" by the Beatles 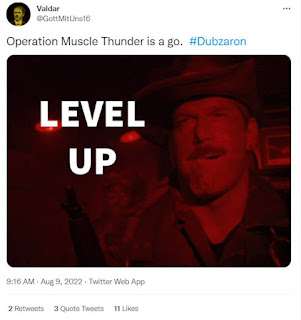